Country sensation Chris Stapleton continues his impressive All American Roadshow tour and will be heading down to Glen Helen Amphitheater on Saturday 11th June 2022 (Rescheduled from Saturday 5th June 2021)! This summer catch one of the biggest names around in an unforgettable live performance – Chris Stapleton never fails to impress! Book your tickets for a sensational night of pure joy and high class entertainment! 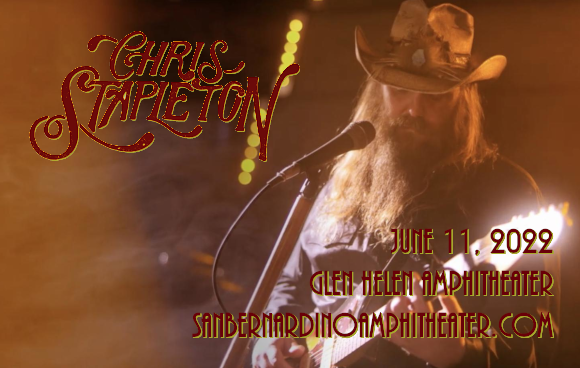 As one of the most popular acts on the Country music scene, Chris Stapleton is the one to watch right now. With his incredible and flawless songwriting talent, Chris Stapleton has had a successful career from the get go, ever since he first followed him passion to Nashville Tennessee in the early 2000s. As he started to write and record his songs, he signed a contract and hasn't looked back ever since. His wonderful songwriting has taken his career to the next level and Chris has also collaborated with other artists assisting them with their own writing, in total he now marks an impressive one hundred and seventy songs to date.

His amazing country collaborations including working with Kenny Chesney and producing the five-week number-one "Never Wanted Nothing More", Josh Turner's "Your Man', George Strait's "Love's Gonna Make It Alright", and Luke Bryan's "Drink a Beer". As well as this Chris Stapleton has featured on all types of albums for artists such as Adele, Brad Paisley, Vince Gill, Peter Frampton, Sheryl Crow and Ed Sheeran. With his amazing work over the last couple of decades, Chris Stapleton has received nothing but positive reviews and recognition for his music, winning five Grammy Awards, seven Academy of Country Music (ACM) Awards, and ten Country Music Association (CMA) Awards for his releases.

This ever popular musician and vocalist has been taking to the road all across North America on his All American Roadshow to bring his best loved material to the stage and as his previous dates have been so successful, Chris Stapleton will be continuing to impress through to 2022. Come and show your love and support for one of the best around! Tickets are now available to book for his stop off at Glen Helen Amphitheater – don't miss out!