EVENT CANCELLED. Please contact your ticket point of purchase to claim a refund on your tickets.

Go and take a cruise down the countryside with Florida Georgia Line as their tour bus comes driving across key cities and states for their “I Love My Country” tour. The country music duo composed of Tyler Hubbard and Brian Kelley, collectively known as Florida Georgia Line, are on the road to promote their album "Life Rolls On". And they'll come rolling by this neck of the woods for a show at the Glen Helen Amphitheater on Saturday 13th November 2021. This is one hot ticket for country music fans. Get on an early start by booking your tickets here by clicking on that 'Get Tickets' sign on this site. Tickets available now! 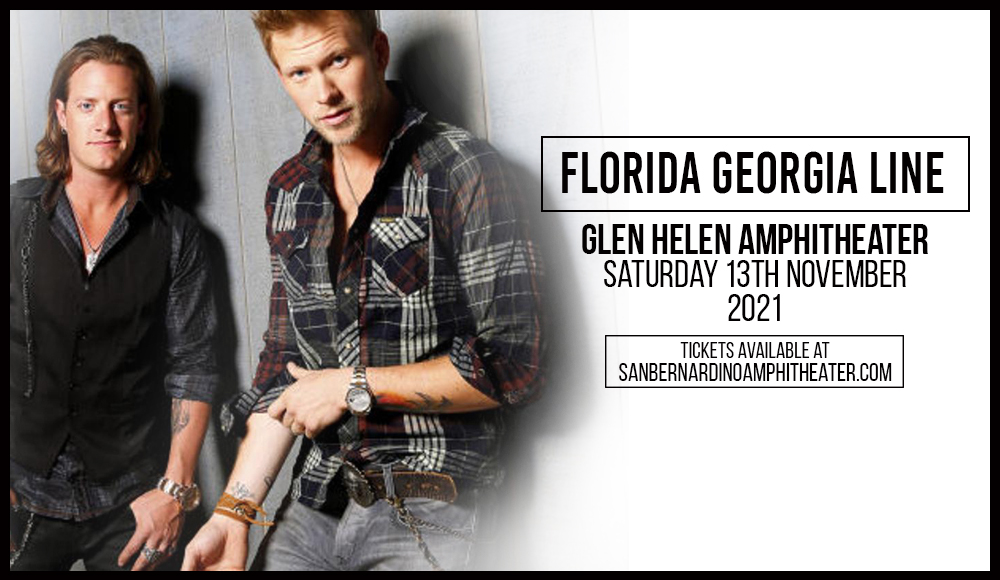 Florida Georgia Line is synonymous with the genre "bro-country." It is a hybrid of country meets rock and hip-hop. As they first came on the country music scene in 2010, FGL was more like a sore thumb. Their bro-country-meets-hick-hop sound was easily overlooked. Slowly but surely, the crowds got bigger over time. With the release of their debut single "Cruise" in 2012, Florida Georgia Line made heads and ears turn as the single broke two major sales records: it was downloaded over seven million times, making it the first country song ever to receive the Diamond certification, and it became the best-selling digital country song, with 24 weeks at number one. And further proving that they're no fluke, their second EP, "It'z Just What We Do", was released in 2012 and charted on the Billboard Top Country Albums chart.

It's been over a decade, Florida Georgia Line is still at the top of its game. And as the world has opened up the concert touring circuit once again, FGL is driving full speed ahead to reach out to their multitude of followers.

“Touring is back, y’all! This is the longest we’ve gone without being on the road, and we’ve been counting down the days until we can finally say – we’re going on tour! Thank you to our fans for all of your support with our new music over the past year, we truly can’t wait to bring these tunes to the stage,” said Hubbard and Kelley via a press release. “We’re excited to see your faces, feel the energy, and bring some good vibes to your city this fall. Let’s make some new memories!”

Get your tickets now and take this wonderful cruise with Florida Georgia Line!