ACM and CMA Entertainer of the Year Luke Bryan brings his Proud to be Right Here Tour to Glen Helen Amphitheater on Saturday 16th October 2021 (Rescheduled from Saturday 28th August 2021)! The tour brings brand new material from the country sensation as he performs songs from his latest album Born Here, Live Here, Die Here, including the smash hit singles “Knockin’ Boots” and “What She Wants Tonight!” Joining the American Idol judge in support will be up-and-comer Caylee Hammack!

"I am truly so thankful to have the opportunity to make music for my fans and to look out into the crowds each night from stage and be proud of what we’ve created. And I’m excited to get on the road with these guest artists too," Bryan says in a press release. 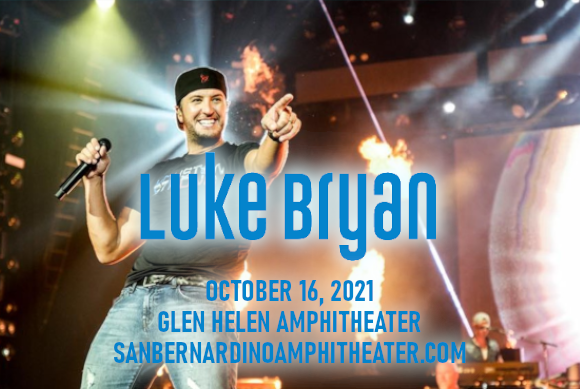 One of country's biggest names, Luke Bryan has been both the Academy of Country Music Awards and Country Music Association Awards "Entertainer of the Year" – winning the latter award twice. Bryan began as a writer for other country artists, beginning his career in Nashville penning songs for several established performers, including Travis Tritt ("Honky-Tonk History") and Billy Currington ("Good Directions"). Now a superstar in his own right, Bryan found smash-hit succes with his 2007 debut album I'll Stay Me, which reached number two on the Billboard Top Country Albums Chart. His career has continued to flourish over the years and he has charted another number-two album on the chart, as well as four number-ones, with three of his albums also reaching number-one on the Billboard 200. Bryan was announced as the artist with the 7th most album sales of all of the decade during 2010-2019, and last year his 2013 album Crash My Party received the first Album of the Decade award from the Academy of Country Music. His most recent release is his seventh studio album, Born Here, Live Here, Die Here.